In 2013, Guadalupe walked through Salem Pregnancy’s doors for the very first time. She was seeking a free ultrasound and found SPCC through a simple google search! After a positive experience, she gave birth to her first daughter. Nearly four years later, she came by to receive an ultrasound for her second child. Everything seemed normal with her pregnancy. It wasn’t until she left that tragedy later struck and she lost this child through miscarriage. But this wasn’t the end of her story or her future experiences with SPCC…

Both of her next two daughters were born after seeing them on the ultrasound at Salem. During her 2019 ultrasound, the staff found out about her miscarriage and asked if they could pray with her. This small act of kindness led to her accepting an open spot in HOPE. SPCC’s Hope Classes became a life changer for Guadalupe. Not only did she make connections with other mothers, but she grew more confident in both life and parenting skills. 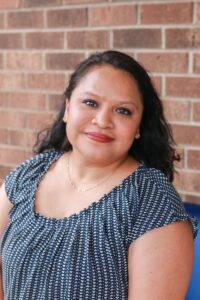 Continuing in her Hope Class, her third daughter was born in 2020. Through each pregnancy, SPCC walked alongside her. In 2022, her nine-year relationship with Salem took a new step forward when Dottie asked her about life goals. At first, she focused on the practical need for a new vehicle. Once she could reach this goal, her next desire was to find a flexible stay-at-home job so that she could care for her three children. With God’s impeccable timing, the need for a Spanish-speaking Hope Class teacher became available on February 1, 2022. Not only could she teach on zoom from home, but she realized the impact she could have on girls just like her! This job offer was a no-brainer.

Two months into her role, she feels it has been such “a blessing to hear others’ stories, and it has given her the ability to talk and pray for expectant mothers.” When she talks about her experience so far, she summed it up as: “Everybody has issues, but as women, strength is a requirement of a single mom, and they must step up. Sometimes she allows her class to go over their minutes because the women finally feel comfortable enough to be open about their lives. She loves being able to see that women can be strong no matter what life brings them.”
If she could tell her Hope Class students anything, she would say: “God has the perfect plan for you and the door for her to become a teacher was an unexpected blessing.”